riot-grrl.com was registered in March of 2004. This is not my first domain, I have another current (but disused) one, and I let another lapse as it was pretty, but unnecessary. This website was created for my amusement, so I could have somewhere to play and make pretty, and also so I could have a website to actually show people. The cupcake layout sort of turned out to be better in concept than in reality, but with a little tweaking I can probably make myself like it again.

The name came from the Good Charlotte song Riot Girls, coz that song rocks. It was a toss up between riot-grrl, or riot-proof, from Tori Amos's Riot Proof coz that song rocks too. I love the word 'riot' and find riot-grrl quite fitting in so many ways.

Inspiration for this layout came from my current love affair with cupcakes and my pretty DSLR camera named Penny. Usually i'm into black, or dark colors, but I went for a different approach going for purple and slightly girly.

Hosting is done through MJZ Hosting, and domain was registered through godaddy.com. I dont host any other peoples sites at this time, but if I know you personally i'm quite happy to provide you with a sub-domain for personal use. I don't host random strangers.

General stuff, such as coding, is CSS and HTML. Both are done in Kate. Everything is uploaded via ftpcube.
All photos were taken with Penny, my Pentax *ist DL 6mega pixel DSLR camera. Any editing that took place happened in Gimp, the same place that any other graphics were edited/created.

Don't worry, the layout will change as time goes on, but that usually only happens when inspiration strikes, and when I get sick of looking at this one. A little spare time also needs to come into the equation.

riot-grrl.com has only had only 2 previous layouts. One lasted almost a year, the other almost 2 years. I did really like the second layout, I just felt it was time for an upgrade. 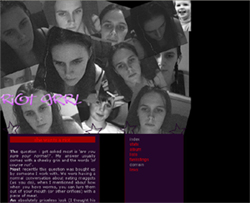